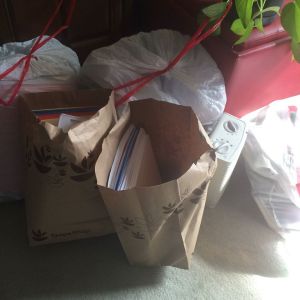 When I was going up for tenure and would worry about what I would do if I didn’t get it, I’d fantasize about becoming a professional organizer. After I earned tenure and went on a year-long sabbatical, I organized every aspect of my life. I touched every file and book, putting them all into groups so I would know exactly what was where. As an anal-retentive Virgo, it felt really good. Each aspect of my life was all together yet in its place.

When I heard the commotion surrounding The Life-Changing Magic of Tidying Up: The Japanese Art of Decluttering and Organizing by Marie Kondo, I didn’t think much of it. I’d read all the books that were big in the 90s and 00s and didn’t think much of a new one. Then I saw Kondo had made Time‘s list of the Top 100 Most Influential People in the World. Of the billions of people on the planet, she was chosen for this list, so I had to read the book and find out why.

I didn’t expect to learn much. Like I said, I didn’t need to learn how to organize because I was already living an organized life. But the book surprised me. Perhaps because it was the first organizational book I have read written by someone from outside of the United States, a fair amount of it was revelatory. Others may not feel that way. I’ve heard criticisms that the book is mere common sense, but what gets labeled as “common sense” is often information people learned early in life and internalized easily. I had never heard of a lot of her ideas before.

A series of blog posts was born, with this being the first. I’m going KonMari all over this house and seeing the effects immediately. What am I learning?

I am doing it all wrong. It’s a key principle of the method that you should do everything at once, like gather each and every article of clothing in the entire house before deciding to discard or keep any of it. That’s logical, but it’s not what I’m doing. Before I was done with the book, I was ready to tackle the closet in my home office. I could see things I had neatly organized while realizing I didn’t really need to keep them. I dove in and ended up with three bags of garbage, one bag of papers to shred, two bags of recycling, one half bag of electronics to recycle, and a box of donations, a lot of it shown in the photo above. Of the two big shelves in the closet, I had totally emptied one.

I love vertical storage in boxes I already own. One key KonMari principle is to store things vertically (I won’t go into why because she does a great job in the book explaining her rationale for everything). I first tried this with the office supplies I had in the closet, putting them on their sides in an old plastic box, and it was a perfect fit. Yes, I can reach everything much more easily than before. Kondo recommends using the boxes Apple products come in because they are so sturdy, and that is very true. I still had the box my iPad mini came in, and the two halves fit perfectly in my desk drawers for loose pens, sticky notes, and flash drives.

Then I thought of something else that might work for a lot of us in the United States: Amazon boxes. I had one I was getting ready to break down and recycle, but instead I folded the flaps into it and taped them all down so nothing could get caught underneath them. It was perfect for everything related to my cameras. I put filters, chargers, and tripods in it–all vertically, of course–and it’s perfect. I can especially see using Amazon boxes for clothes.

But that will be another post in the future. I’m just getting started.

If the title of the post contains the title of an essay or book (or TV show, movie, or anything else), and you don't want the content spoiled for you, do not read that post.

You know you love me. We're talking about whole new forms of subjectivity here.